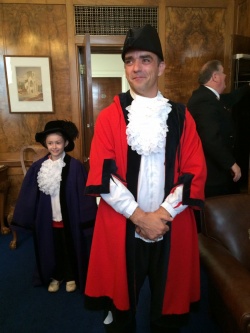 Southampton Gymnastics Club has served the City of Southampton and its residents with 46 years of gymnastics opportunities; giving tens of thousands of Southampton’s children the chance to gain the benefits of involvement in sport.

The privilege for the club, to give so many children active lifestyle opportunities, would not have been possible without the close bond and working relationship of the council and its leaders working in partnership with the club.

As society and sport changes from an amateur to a professional and business-like approach, Southampton Gymnastics Club stays steadfast to its principles of providing gymnastics to people of all ages and abilities, from toddlers to adults and from recreational to international level.

The tour of the chambers, and Mayor Ivan’s interesting descriptions of its history and the changes it has experienced through the years, enlightened our visiting party. Much like the City, Southampton Gymnastics Club has evolved over the years, and it was encouraging and exciting to see the obvious connections the Club and City Council still have.

As well as the group of very dedicated volunteers that give so many hours for the club, enjoying the visit, a selection of our young and successful gymnasts got to see the splendour of the Chambers before they settle into their preparation to represent the Club, City and South of England at the British Grades Finals at the end of May.

As we were captivated by dressing up in the Mayor’s luxurious robes, the Club received some incredibly exciting news. Mayor Ivan kindly offered and dutifully announced the news to our Senior British Men’s Pairs Champions that they had been selected to represent Southampton and Great Britain at the forthcoming World Championships in July.

With the interesting and informative visit coming to an end, and refreshments served to all, it was great to see the Mayor take such interest in the children’s achievements and the means by which the Club provides these opportunities.

Southampton Gymnastics would like to thank Mayor Ivan and the Council for their continued support and look forward to serving the City for many years to come. 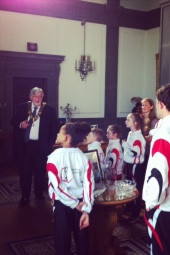 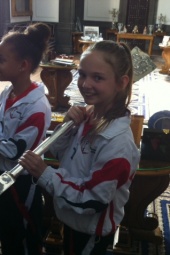